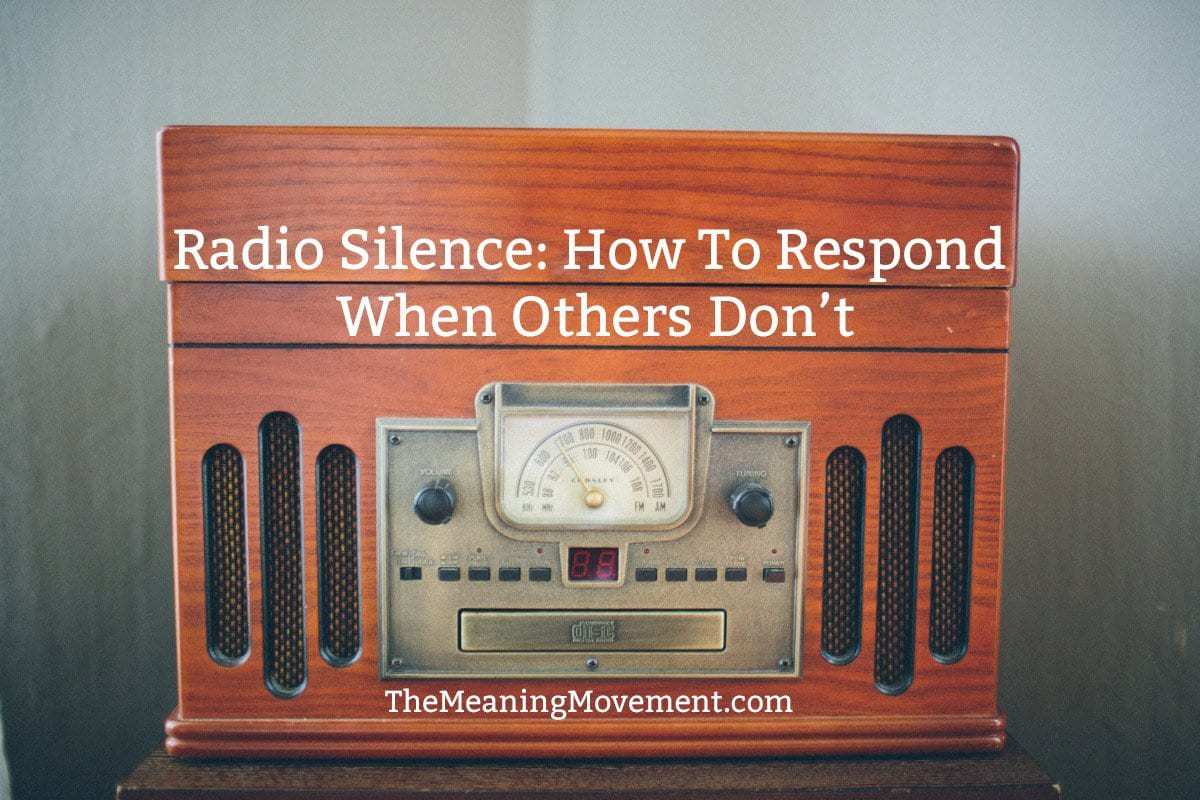 1. I sent off some photos to a client who I was really hoping to impress. I had worked hard on them. I was proud of what I had made, but I wasn’t sure if it met the expectation of the client (making art is often like that, isn’t it?). The client was excited and had asked about them, once or twice. I created an online gallery and emailed the link over. Then I heard nothing back. For days, it was radio silence.

2. I wrote a blog post that I felt really connected to. It felt vulnerable and honest. Many of my posts feel that way, but this one was particularly so. After I published it, I didn’t hear anything back for a long time.

3. I gave a talk at a grad school to a group of prospective students. I presented my theory of meaning in work and how to pursue it— material I’ve been wrestling with, working over and over. Though I could see and hear some responses during the talk, I didn’t have any significant interactions about what I shared.

These three moments all left me in a similar place. I had done something that I felt was meaningful but I did not have significant feedback to tell me how it was received.

They all left me with silence.

Silence is a tricky thing, yet it happens all the time. It’s such a regular occurrence, that Stacia and I have a few names for it. We call it radio silence or (more often) just “crickets”. When I tell Stacia that I’ve heard “nothing but crickets”, I smile every time— which helps ease the tension.

The deeper you step into your life’s work, the more of yourself you will be putting into the things you do. It can be risky and vulnerable. You’re making, writing, saying, and asking for things that matter deeply to you.

And yet sometimes you put yourself out there and don’t get a response.

The temptation is to fill the silence with judgements and assumptions.

(Warning: you are now entering my internal dialogue…)

3. Maybe no one wanted to talk because I totally missed the mark with what I shared. Maybe my ideas aren’t as interesting as I think they are?

Though some of these could be true or none of them may be; yet those are the places that silence takes me.

When your risk is met with silence, where does it take you? With what do you fill the silence?

There are always other and more kind stories to be told:

1. Maybe the client saw the work and enjoyed the photos, but has been too swamped at work to respond.

2. Maybe the blog post was right on and thought provoking, but not in a way that encourages discussion. Maybe it felt like a complete thought to the readers, and they (you) didn’t feel the need to add anything.

3. Maybe the prospective students were working on discerning big decisions: which grad school? and/or grad school vs. no grad school? Their attention was full of many other things.

I quickly fill the silence with judgements and criticism of myself, my art, and my work. I am quick to assume the worst. Recently I’ve been paying attention to this and trying to offer counter stories that are more kind to me.

I believe in the things I do. And I know that sometimes things don’t come out quite as well as I want them to. But silence doesn’t mean failure. Silence does not mean that your work is bad. In fact, silence may not even mean your work is neutral (not good, not bad, just “meh”). Silence may be the result of many factors.

When I think about it, I did not respond outwardly to some of the deepest and most impactful moments in my life. I don’t comment on every blog post I read (though I comment more now than I ever have!).  I don’t always share when I’ve been moved with the person whose voice moved me.

There are many reasons for radio silence. Don’t assume the worst.[tweet that]

If you feel the need to fill the silence— if you need some feedback — try asking for it. I do this often:

1. After a week of waiting, I emailed the client and asked if he had anything to share.

2. I could have emailed it to a few friends or readers and asked for feedback. I could have explained the insecurity I was feeling about the post and asked if they could help me know if my fears are unfounded or not.

3. I asked for feedback from a couple staff members who were at the event and found that they had many good things to say.

Don’t let yourself fill the silence without questioning what you’re filling it with. There are many reasons for radio silence.

In the comments, I’d love to hear about your relationship with the “crickets”. What do you do when you risk and don’t hear much back? Click here to jump down to the comment section.